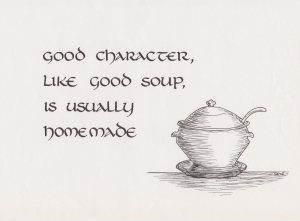 Fourteen years ago today, a double funeral was held for my parents, who died a day apart. Devastated, at the time we were sustained by the belief that at least they were together. A couple of months later that didn’t seem fair, because that meant we were orphans. Although we were fully-grown adults, most with families of our own, that sense of utter loss was overwhelming. Well-meaning comments of “they had a good innings” were not appreciated, although they were made by those trying to be helpful.
However, time passes and the grief can take a back seat, with fond memories and recollections taking the place of that all-encompassing sense of loss.

The above quote, by an unknown author, is calligraphed by me, in Ronde Character, with love.