Back in the late 1990’s I was heavily into folk art, attending weekly lessons where I created various items decorated with painted pictures. This reflected a cosy cottage décor. I have a few less knick-knacks around the house, and my tastes have become more centred on an Art Deco theme.

One of the things I enjoyed painting were mammies, who now reside on the laundry porch, so I still get to keep them, but have more room inside, a win-win situation.

Isn’t it ironic that I just posted a picture of my lovely magpie garden ornament, and then I looked out the window to find it had disappeared? 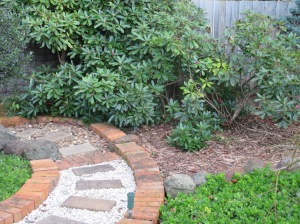 Maybe I was wrong, and it wasn’t an ornament, but an actual magpie, the victim of some magic spell that had it frozen and suspended in time, awaiting a kiss from a prandsome hince? I enjoy the occasional spoonerism, as well as a fairy tale!

Attitude is everything. I could feel violated and unsafe in my own neighbourhood, or just cop it sweet and realise how lucky I am to have had my magpie for a number of years. The cost of the ornament and the time I had him probably balances out to a fair rental.

I’m tipping that some avid Collingwood supporter has coveted said magpie for some time, and finally caved to their inner immoral side 😦

We don’t have a front fence, which some could say is an open invitation for theft, but I refuse to give into the fear of other items being stolen, by moving them. None of the other ornaments represent Australian football teams, so maybe they could be deemed safer. And it’s not like I don’t have plenty of others. Perhaps the assailant assumed I had so many I wouldn’t miss just one of them? 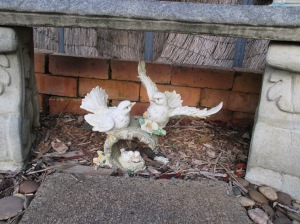 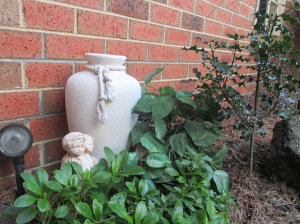 As you can see, two themes are prevalent here: birds and cherubs. One good thing about blogging is that you take more photos, which means at least I can treasure the  memory of my little garden magpie, even if he is no longer here. 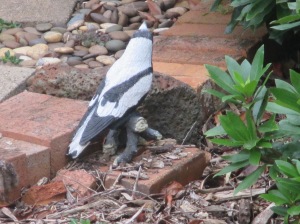 This was probably the first cherub I ever purchased. It has never looked better since I put it on a pedestal (somewhere I like to be, but usually fall off).

With the addition of a little succulent from a dear friend, it is now complete.

It’s funny how you buy one item, and then before long there is a theme happening and suddenly you have a whole collection of said item.

How does that happen? Sometimes it occurs because you may have bought one or two things that you liked, and then a friend or family member gives you a similar present. Then, if you group them together people assume you collect them and are more than happy to increase the number you have, whether you like it or not!

Looking around my house and garden, I have numerous collections: cats, dolphins, pandas, zebras, bells, arches, art deco items, cherubs, animal print, with tropical items being the current flavour of the month. However, just because I love something doesn’t mean I buy anything that fits that description. Perhaps the secret to having a good collection is being selective.